This article was published in the December 2019 edition of Soul Search, the Journal of The Sole Society

Ed: This is an abridged version of the talk Tony gave at our Annual Gathering in October in which, as a prelude to the subject matter below, he suggested that we also focus on the social history of the times our ancestors lived in. He felt that the Sole Society has two big assets: our database and our award-winning journal (thanks Tony!). The journal is good value for the membership and the only contact many had with us. Events and periods of history should be written about in Sole Search and this could be the key to our survival.
I have been involved in family history for more than fifty years. In that time the available source material has expanded to an extent that I could not have dreamed of in the 1960s, thanks mostly to computers and the Internet.
It has never been easier to assemble a family tree and to broadcast it around the world. Although we know that we should always check second-hand information by referring back to the original documents, it is human nature to grasp at straws, especially when they appear to solve a long-standing problem.
Membership of the Sole Society ensures that research is of the highest quality and minimises the chance of errors; we have a first-class collection of records, which we update whenever new material becomes available. We would not want our members to be ‘barking up the wrong tree’.
The most frequent question I’ve been asked by friends and family over the years is “How far back have you got?”.
In our high-speed world we accept that some people merely want to discover their earliest ancestor, perhaps to drop into a conversation and impress their friends. We hope they might return to the hobby when they have more time to spare, but for the present we are happy to share our knowledge of their family with them. They might stay members for only a year or two while they put together a tree of sorts, comprising mostly names and dates. However I became interested in family history because I wanted to know more about my forebears, not just their names and dates. When they lived and died is clearly relevant, but it is also a gateway to a greater understanding of their lives. My aim is always to build a picture of the world they lived in, by exploring what was happening at the time and what specific events may have influenced their actions. Was my ancestor living in the countryside or was he a town or city dweller? What was his occupation and was it different from those of his father and his son? Was it a period of hardship or famine or was life relatively easy? Was it a time of peace or conflict?
All of our families have a good proportion of agricultural labourers and some of mine lived along the south coast in Hampshire and Dorset. I’ve learned something of their lives by reading Thomas Hardy novels and short stories. Hardy used to spend hours in Dorchester library, researching old newspapers and gleaning ideas from them. Much of his writing is based on actual events which my ancestors would have known about.
For a few years there was great anxiety amongst our population as Napoleon’s army camped along the French coast and invasion seemed a real possibility. One of our early national censuses was initially withheld, as it was feared that the information about the number of people living in our coastal towns would be of help to our enemies should they be planning to invade.
By the 1850s, new farm machinery was forcing labourers to migrate to the towns in search of work. Londoners were also aware of the situation in the countryside, noticing that policemen seemed to be getting bigger! The London Metropolitan Police often recruited country lads, as they tended to be taller and stronger than their urban counterparts.
By the eighteenth century many of my ancestors were Londoners, inhabitants of what was the largest city in the world. My favourite window on urban life before the twentieth century has to be Charles Dickens. For example, his novel Barnaby Rudge is set during the Gordon Riots of 1780. My ancestors must have been there, cowering behind their boarded-up windows, as mobs roamed the streets, throwing bricks and setting fires in an atmosphere of conspiracy and religious conflict. 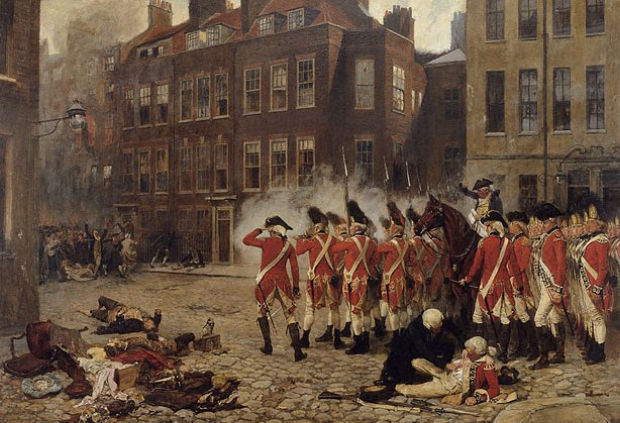 The Gordon Riots by John Seymour Lucas. Tony’s ancestors were living in London at the time.

Dickens was a fierce critic and campaigner on the subject of Victorian poor laws and the harsh conditions in private boarding schools. His books contain many descriptions of ordinary people and what they had to bear. In the twentieth century, my grandparents’ generation, even those relatively well-off, still had a morbid dread of ending their days in a workhouse, whether through poverty or sickness.
Having learned something of our ancestors’ living conditions, we need to consider the major events of their lives. I have researched many families over the years and it has taught me a great deal about people and what makes them tick. I have seen how circumstances and even a single event can change the direction of people’s lives and it made me consider what events were significant in my life.
It can be fun to look back and make a list of things that proved turning points, when life took a different direction, or perhaps a day that proved memorable. For example, I was four years old in June 1953 when we had a street party to mark the Queen’s coronation. I can recall the first day of each school I went to, and I remember the first time I watched commercial television, with Popeye, Superman and the advertisements for Murray Mints, chocolate spread and Shippams fish paste. I was about seven and it seemed like my first glimpse of a big, wide world. There were epic events, the Munich air disaster, the assassination of JFK, and within weeks of England winning the football World Cup, there was Aberfan, when 144 died, including 116 infants school children. I was still in my teens and I heard many people asking, “Where was God when these tiny children were dying?” A single event can change people forever and I believe many people lost faith that day. Chernobyl, the death of Princess Diana, and the Grenfell Tower fire may all have left a mark on society, although it’s probably too soon to judge.
Once you have made your list, which is bound to differ from mine, you should select a ‘favourite’ ancestor and make a list of the events in his or her life. In case he or she lived in Victorian London, you might want to consider the following incident for your list.
On Tuesday 3 September 1878 a young married couple, William and Lucy, left their infant son with a nursemaid and made their way to Swan Pier, London Bridge for a day at Rosherville Gardens, Gravesend, one of the most popular pleasure gardens of the age. The return fare was two shillings each and the paddle steamer SS Princess Alice sailed at 10am. After a full day of varied entertainments, which included food, music, dancing, novelty acts and a menagerie, as well as the gardens themselves, the ship left Gravesend at about 6pm. The ship had only two lifeboats and twelve lifebuoys, but she was carrying more than 750 passengers. A band played as she made her way home on what seemed to be a perfect evening. Twice in every 24 hours when the tide was at its highest it was customary to open the sluices by Gallions Reach and allow millions of gallons of raw sewage to escape into the Thames. On this evening the discharge occurred at about 7pm. Further upstream an empty collier, SS Bywell Castle, was leaving Millwall dry dock on its way to Newcastle-upon-Tyne. The iron-built vessel was taller and much heavier than the wooden paddle steamer. At 7.45pm the two ships collided in Gallions Reach, within sight of the North Woolwich Pier. The SS Princess Alice was cut in two and she sank within four minutes without launching her lifeboats. Most of her passengers were either thrown into the foul water or trapped below deck. Only 69 people were actually rescued although others may have swum to safety. Some bodies may have been buried in the Thames mud or swept out to sea and many that were eventually recovered had decomposed beyond possible identification. The remains of 120 victims were buried together at Woolwich Old Cemetery, Plumstead. In the absence of a passenger list, the exact numbers of passengers and casualties will never be known. 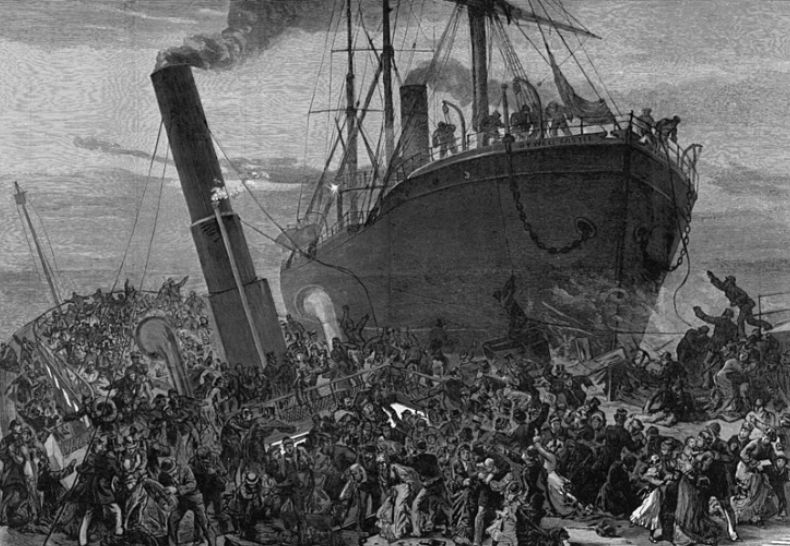 William and Lucy were among more than 600 dead. William’s body was never found, but Lucy’s remains were identified by her sister from the clothing and jewellery. Frederick, left at home with a nursemaid, was five months old when his parents died. He spent his childhood in the District Orphan Asylum, Wanstead.
Londoners in particular would have been shocked and horrified that such a thing could happen so close to home. Surely nothing like it could ever occur again, or could it? In August 1989 the pleasure steamer Marchioness was in collision with the dredger Bowbelle on the Thames between Cannon Street railway bridge and Southwark Bridge. The pleasure steamer sank in 30 seconds and 51 people died.
It takes more than a few dates to describe someone’s life. We need to get to know our ancestors and to do that we have to walk a mile in their shoes. What were the big events of their lives and what was happening in their world?
Next time someone asks, “How far back have you got?”, we can add to our reply, “and we met some really interesting people on the way.”