This article was published in the August 2019 edition of Soul Search, the Journal of The Sole Society

The Fifth Massachusetts Battery Memorial is dedicated to the men of the battery who fought at the Battle of Gettysburg in 1863. It was erected by the State of Massachusetts in 1885 and lies south of Gettysburg on Wheatfield Road. It is inscribed: ‘Fifth Massachusetts Battery’ and ‘7 enlisted men killed, 1 officer. 12 enlisted men wounded. 700 rounds fired. Charles A Philips Captain Comdg July 2nd 1863. The Nation Lives. Reserve Artillery.’
The Battle of Gettysburg was fought in and around the town of Gettysburg on 2–4 July 1863. It resulted in the most casualties of any battle of the American Civil War, with the number of casualties (dead, wounded and captured) being given as just over 23,000 for the Union Army and between 23,000 and 28,000 for the Confederates, which together represented about one third of all troops engaged in the battle. It is also generally regarded as the turning point in the War. Although not an overwhelming victory for the Union, it brought to a halt the invasion of the North by Robert E Lee’s Army of Northern Virginia, which began after Lee’s victory at Chancellorsville. Many believe that if Lee’s army had won at Gettysburg, it would have signalled the end of the conflict, but instead the war dragged on for another two years. After Gettysburg, Lee’s army conducted no more offensive campaigns, but merely responded to the Union’s initiatives in 1864 and 1865.
The Fifth Massachusetts Battery (later known as The Fighting Fifth) was organised in autumn 1861 by George D Allen and John B Hyde, who both became 1st Lieutenants in the Battery. The men recruited for the unit were sent for artillery training first to Camp Shouler in Linnfield, MA, then to Camp Meigs in Readville, MA. Having completed initial training, the Battery left for Washington on Christmas Day 1861, where it was assigned to what would become the Fifth Corps of the Army of the Potomac. The unit’s original ordnance was replaced with six 3 inch Ordnance Rifles, which were wrought iron, muzzle-loading cannon that could fire a 9½ lb projectile 1800 yd. The Battery was then sent to Virginia, where it took part in its first action at Howards Mill on 4 April 1862. It was also present at the siege of Yorktown, though it was not seriously engaged there. It was heavily involved at Gaines Mill in June 1862, where two of its men were killed and four were injured – it also lost four of its six guns and 22 horses. In September the battery returned to the forces defending Washington to await the arrival of new guns. Once re-equipped, it rejoined the Fifth Division at Sharpsville in October. In December 1862 it took part in the battle of Fredericksberg. It participated in the ‘Mud March’ in January 1863 and in the campaign around Chancellersville before being assigned to McGilvery’s Reserve Artillery Brigade with which it participated in the Battle of Gettysburg. After Gettysberg the Battery continued to take a very active part in the war until it was finally disbanded on 3 May 1865. [Ed: The ‘Mud March’ was a failed attempt to cross the Rappahannock River at Fredericksburg when severe winter storm which turned the approach to the river and its banks to mud] 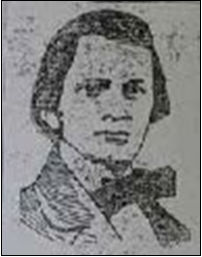 Among the early recruits for the Fifth Massachusetts Battery was Henry Warren Soule. His name appears in the list of those who enlisted in New Bedford, MA, between 23 September and 8 October 1861 and he served with them until his death at Gettysburg on 2 Jul 1863. There is an eye witness account of Henry being wounded and thrown from his horse while his unit were trying to reposition one of the guns during a Confederate charge (History of the Fifth Massachusetts Battery, Organized Oct 3 1861, mustered out Jun 12 1865, https://archive.org/details/historyoffifthma00unit). On 3 Jul he was reported as missing and then on 4 Jul his body was found under an apple tree close to where the battery had been positioned. In an article of reminiscences of his Civil War service in a Fairhaven, MA, newspaper, dated 24 April 1908, William H Dunham, Henry Soule’s cousin, who also served in the Fifth Massachusetts Battery, described Henry’s death:
…our next important fight was Gettysburg. I was wounded here and left on the field for dead. When I returned to consciousness I found myself between two picket lines. My cousin, Henry Soule was lying near me. I heard him ask for a drink of water and saw him run through by a rebel bayonet….
So what do we know about Henry and his family?
Henry, a descendant of George Soule of the Mayflower and Mary Becket, was born in New Bedford, MA, on 20 September 1841 and was the third of the five children of Thomas Howard and Margaret Albertson (née Dunham) Soule.
Thomas was a shipwright, who had been born in 1810 Belchertown, MA, where his father was a toll-gate keeper. After serving his apprenticeship in Duxbury, Thomas spent a few years in New Bedford and then moved first to Fairhaven and then to Mattapoisett. On 5 May 1833 Thomas married Margaret Albertson Dunham in Nantucket and two sons, William and Rufus, were born in Mattapoisett in 1836 and 1839, respectively.
Thomas returned to New Bedford in 1841 to become the foreman for Stephen Andrews, a well-known builder of whaling vessels. The family expanded after the return to New Bedford, with the births of Henry (1841), Thomas Howard (844) and Mary Elvira (1850).
In 1856 Thomas entered into a partnership with William Edwards under the name Edwards and Soule, Shipbuilders, a partnership that continued until Thomas retired in 1872. He was always active in the civic affairs of New Bedford, taking particular interest in the Free Public Library and the Fire Department and was an early member of the Republican Party.
All four of Thomas and Margaret’s sons served in the Union forces during the Civil War. William joined the 1st and later the 4th Massachusetts Volunteer Cavalry and by the end of the war he had been brevetted captain. Rufus was a member of Company E, 3rd Massachusetts Volunteer Infantry. Henry joined the ‘Fighting Fifth,’ as his Battery came to be known, and Thomas served in the Union Navy.
After the war, Henry’s brothers all became successful businessmen. William, the eldest became mayor of New Bedford in 1879-80. Rufus became a partner in Hathaway and Soule, a very successful boot and shoe manufacturing company in New Bedford. On leaving the Union Navy Thomas initially returned to the merchant service but made his last voyage in 1867. Thereafter he went into the hotel business in Nantucket. Their sister Mary married Anthony Dennis Hall, a Boston hotel proprietor, in New Bedford on 20 May 1872.
Margaret Albertson Soule died in New Bedford on 16 July 1879 and Thomas Howard Soule, senior, died there on 17 Apr 1900. Both are buried in Oak Grove Cemetery, New Bedford.

The caption on this photo is ‘The original 5th Massachusetts Battery One Detachment at drill. Rappahannock Station, VA April 1864’. We do not know what detachment Henry Warren Soule was in.