Earlier issues of Soul Search (Nos 1, 2 & 5) have discussed place-names that might have an affinity to the surnames SAUL, SOLLEY and SOLE:

Place-names that might be linked to the surname SEWELL have received less attention. In this respect the Domesday Book of 1086 provides some interesting insights, in particular to places that the clerks recorded as SEWELLE, the form that the modern spelling of the surname has adopted.

SEWELL (Beds) is a hamlet near Dunstable that belonged to the royal manor of Houghton Regis and named SEWELLE in the Domesday Book. It gave its name to the de SEWELL family, to whom there are several references between 1247 and 1400.  By 1433 two residents of the village were more plainly known as John and Henry SEWELL and in 1473 Matilda SEWELL founded a chantry at Stratton (Biggleswade). According to the Victoria County History, SEWELL, which was not referred to as a separate manor until 1536, passed into the hands of the DYVE family. In the Close Rolls a John SEWELL appears at Ledburn (6 miles W) in 1440 and the Archdeaconry Court mentions Robertus SEWELL and Elene SAWELL at Ivinghoe (5 miles SW) in 1487.

SWELL (Som) is a hamlet 9 miles W of Taunton that also had the Domeday name of SEWELLE. The Patent Rolls of 1228 showed Ricardum SUUEL as having land at Cothelstone (14 miles NW) and the Feet of Fines of 1334 indicated that William de SWELLE or SEWOLLE  held land at Spaxton and Goathurst  (12 miles to the NW).

SHEFFIELD (Berks) is on the SW edge of Reading and was the location of the third DomesdaySEWELLE. Although there are records in the medieval period of a SEWELL presence in Berkshire, none occur near SHEFFIELD.

SEAWELL (Nhants) is no more than a farmstead 10 miles SW of Northampton and the site of the fourth SEWELLE. Once again there is no evidence to connect this place with the SEWELLs. The Northamptonshire de SEWELLs mentioned in the 1279 Hundreds Roll and the Close Roll of 1304 may have been members of the Bedfordshire family.

There are other places with possible SEWELL associations:

SWELL (Glos). Upper and Lower SWELL, near Stow-in-the-Wold, are named SUELLE in the Domesday Book. They still held this name in the Close Rolls of 1237. In the taxation returns of 1327 and 1381 the surname SWEL(L)(E) occured at several locations in the county, including the villages themselves .

SEAVILLE (Cumb) was on the estate of the former Cistercian abbey of Holme Cultram (founded 1150), and is now a hamlet 13 miles W of Carlisle. The county was largely outside the range of the Domesday Book and the earliest reference in 1377 gave the name as SEUYLL. Later spellings were SEVELL (1581),SEVILL (1649) and even SEWELL (1777). [Soul Search Vol 2, No 4]

SYWELL (Nhants) was SNEWELLE in the Domesday Book and survives as a village a few miles NE of Northampton. The Eyre of 1329 mentioned Henry and Robert de SYWELLE. At Upwood, 30 miles NE, William SYWELLE was recorded in the Lay Subsidy Rolls of 1332 and Godfrey SYWELL in the 1327 Rolls.

SHOWELL (Oxon) recorded as SIVEWELLE in the Domesday Book is now no more than a farmstead NW of Chipping Norton. In the Feet of Fines of 1207 it was named SEUEWELLE, and in the Hundreds Roll of 1279 there is a reference to Hugo de SONEWELLE. He was named as Hugo de SEUEWELLEAS in the Feet of Fines of 1291.  The Sessions of the Peace of 1391 gave the Latin place-name as SEWELL.

SILSOE (Beds) to the E of Flitwick is given the Domesday name of SEWILESSOU. There was also another Domesday SEWILESSOU in the Guthlaxton Wapentake (SW of Leicester).

SHAWELL (Leics) – a village S of Lutterworth, was named SAWELLE in 1086. A scattering of SEWALEs, including a de SEWALE, existed in Leicestershire in the 14th century.

The presence of the preposition de usually indicated that the name that follows was the person’s place of origin. The following selection of such names from amongst the medieval records might suggest other possible place-name associations:

An earlier issue of Soul Search drew attention to possible links with place-names in France, in particular SOULLES, SW of St Lô (Manche).  During the long English occupation of Gascony the Vicomte de SOULE (or SOLE or SULE) was recorded in thePatent Rolls as having met Henry III in 1242. The area (or pays) from which his name was derived is in the foothills of the Pyrenees, SW of Pau.

During a recent visit to France I found myself, without intent, in the neighbourhood of three more places with intriguing names: 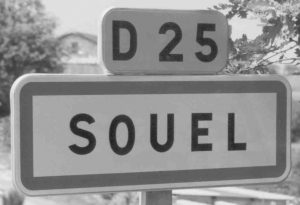 and Le SUEL (Ardèche) near Aubenas