This article was originally published in the April 1998 edition of Soul Search, the journal of The Sole Society, with revisions made in Jan 2002

The corresponding article on the Northumberland & Durham SEWELLs suggests that some may have migrated from Cumberland.  The route running parallel to Hadrian’s Wall, from Carlisle along the valley of the South Tyne to Newcastle, was of major importance for trade. As agricultural employment declined, and later as Census returns confirm, some Cumbrian SEWELLs sought work in the North-East.

If one examines the number of SEWELL events listed in the IGI for the four northern counties, the prominent feature is the relatively large concentration in Cumberland   This county accounted for 6% of all the 16th century SEWELL events in the IGI for England; by the 19th century the proportion was 21%. These figures (derived from the 1988 IGI listing) are even more significant when allowances are made for the smaller population of Cumberland and the later starting dates of parish church registers.

Number of SEWELL events in 1988 IGI

Because of cross-border conflict, Cumberland lacks the pre-16th century records of the kind found further south.  From 945 Cumberland was part of the kingdom of Scotland and did not come under firm English rule until 1157. Consequently, the Domesday Survey of 1086 does not extend further than the area south of Kendal and the Furness district of Lancashire. The only surviving Lay Subsidy Roll included the following entries:

This is not very convincing evidence of early occupation by SEWELLs, compared with Essex where in 1327 a similar tax list contained 17 SEWALEs. Unfortunately the one SEWALE reference in Cumberland suffers from a transcription problem and could be of doubtful authenticity.  Some of the other names quoted might be related to SAUL or to SAVILLE.

The Poll Tax of 1377 was levied in Cumberland but only the records for Carlisle survive. There are no SEWELLs, only two SOUREBYs. In Westmorland the 1379 Poll Tax includes:

Other documentary sources, as far as they exist, are equally unrevealing about the likely presence of SEWELLs :

Sulewad, as we shall see below, was an early spelling of Solway.

There are several references to de SOULIS and de SOULBY, the former already mentioned in the context of Northumberland (see also Don Steel in Soul Search Vol 1 No 2 p.39). The latter surname is probably derived from the place-name Soulby (WES), NW of Kirkby Stephen, or alternatively Soulby (CUL), SW of Penrith (see Soul Search Vol 1 No 1 p.9).

1150     Radulf de SOLL, was witness to the abbey’s foundation charter.

1248    Nicholas de SULES named by the King of Scotland as a borderer who has suffered damage by being impleaded before the King of England for an offence committed in England by his men dwelling in Scotland.

1295         J. de SOULE  – concerning the marriage agreement between the king of Scotland’s son and the French king’s niece.

The last three records may be linked to the de SUDELEYs of Worcestershire.

Another place-name, Seaville, has an interesting chronology:

1553        Sewell (Sevil) was one of the villages appointed to keep a coastal watch, between Brownrigge kiln to Staryhill, for Scottish marauders. (History & Antiquities of Westmorland & Cumberland – Nicolson & Burn – Vol 2 1777). 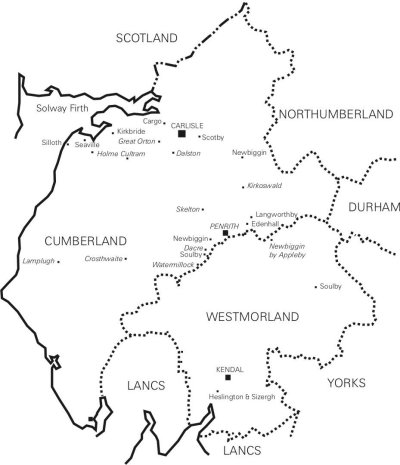 Despite the absence from early records, by the early 16th century SEWELL was an established surname, particularly in the Carlisle area. Without access to original documents it is not possible to say whether or not the name was spelt in its modern form or this is the form adopted by transcribers. Several SEWELLs were prominent in the affairs of Carlisle (Municipal Records of the City of Carlisle – CWAAS 1887, Medieval Carlisle Vol 2 by H.Summerson 1993 and Hugh Sewell, canon and prebendary of Carlisle by M.M.Clark – CWAAS Vol XCI  1991). The earliest recorded SEWELLs were:

Wills in the Diocesan Registry, Carlisle

The emergence of the SAULs in the parish of Holme Cultram (now Abbey Town) in 1585 has already received attention in Soul Search Vol 1 No 1 p.9 , No 4 p.97 & No 5 p.111. The earliest SAUL I have found was an itinerant justice and therefore not necessarily domiciled in Cumbria:

With the above exception the first SAULs were located south of Kendal (WES):

After 1491 some of the SAULs in the Kendal area seem to have been recorded as SALL or SALLE.  As indicated above in some of the parishes there are SILLs or SYLLs as well as SAULs.

The Holme Cultram SAULS were evidently Quakers and are well-documented in the following volume:

1675    Holme Cultram – Several SAULS before the courts for failing to have their children baptised.

There seems to be no record of SAULs in Holme Cultram before 1585, unless the names in the Lay Subsidy of 1332 suggest a link.

Not surprisingly, the available evidence provides no certain answers as to the origin of the Cumbrian SEWELLs.  There is nothing to confirm the traditional view that SEWELL is derived from a Viking personal name. The role of place-names, although interesting, is an open to debate. What the records clearly show is that the SEWELLs (and the SAULs) suddenly enter the records at the end of the 15th century. From their social standing one might have expected earlier references.

Finally, one needs to note that the IGI highlights some marked distinctions between the four northern counties worth further investigation. In the 16th-17th century the SEWELLs dominated in Cumberland and the SAULs in Westmorland. In Northumberland and County Durham, there are SEWELLs, but no SAULs until the 18th century.  SOLE in Northumberland appears as SOWELL and in Durham mainly as SOULE.