This article was originally published in the November 1997 edition of Soul Search, the journal of The Sole Society and revised in January 2002

There are numerous records of the 12th-15th century that can usefully be searched for names. Although such evidence cannot be fully representative of the whole population, it nevertheless provides some insight into the origins and distribution of names.  Such documents were not limited to the privileged, but record the names ordinary people who were beneficiaries of a will, jurymen and witnesses, tenants, taxpayers or simply petty law-breakers.

Many documents have been transcribed and published by the Public Record Office and by the various County Record Societies, either in their original Latin or in translation.  Typical sources are:

Domesday Book – detailed survey in 1086 of the ownership of land.

Hundreds Roll (Rotuli Hundredorum) – a survey of c.1274 of rights relating to the Crown.

Close Rolls – letters ‘close’ (folded) such as deeds and conveyances.

Feet of Fines (from Pedes Finium or settlement of boundaries) – lawsuits determining titles to land.

Justices in Eyre – records of the itinerant judges  (eyre from iter = journey).

Inquisitions Post-Mortem – enquiries into the distribution of an estate.

These documents would have been compiled from oral statements by clerks using an abbreviated form of Latin. The spelling of names relied on the clerk’s interpretation. Modern translators and transcribers, unfortunately, may also have taken liberties with the spelling.  In these circumstances one has to accept that any analysis of names will have only limited validity. Determining the places to which names apply is also full of hazards, and this is particularly true of the wealthier landlords whose lands may be dispersed.  In legal cases only the place where the court was held may be given, and this may be long way from where events took place. There is also the problem of name duplication, the same person possibly re-occurring in different documents.  Finally one has to accept that coverage is very patchy, many records have been lost or if they exist, may not yet have been transcribed.  The North is poorly documented because of cross-border conflicts and there are no Taxation Rolls for the Palatinate counties of Durham and Cheshire.

With all these constraints in mind it still seems worthwhile trying to draw some conclusions from over 900 names I have collected from local study libraries, and the university libraries in Oxford and Cambridge. I cannot claim this to have been an exhaustive trawl, partly because it started as a very limited exercise concerned with the Northern counties.

The observations that follow are based on a simple name count ignoring any possible repetition amongst the records:

The personal name SEWALLUS (e.g. SEWALLO de Westbrom, 1327 Suffolk) seems to have flourished from the aftermath of the Norman invasion to the late 14th century.

Map 1 shows the greatest concentration was in Essex and did not spread significantly, having no impact in the West. 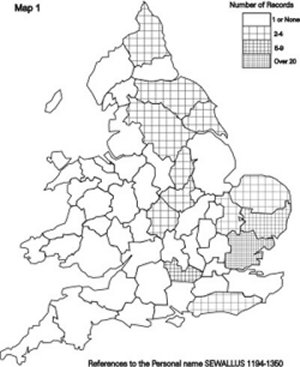 Typically for early medieval period, people were often named after their place of origin using the preposition de (or atte). Up to 1400 the Domesday place-name SEWELLE in Bedfordshire was often associated with the deSEWELLs.  This is the only medieval example of of the use of the name SEWELL as we know it today. There were other SEWELLE place-names, but none adopted this form of the spelling. SEWELL without the de appeared as early as 1248, but not again until 1329 and 1340; its use became more frequent after 1388 except in Norfolk, Suffolk and Essex. The variant SUEL, which one most readily links with SEWELL appeared in Dorset and Huntingdonshire.

Map 2 shows the incidence of  the SEWELLs and SUELs. 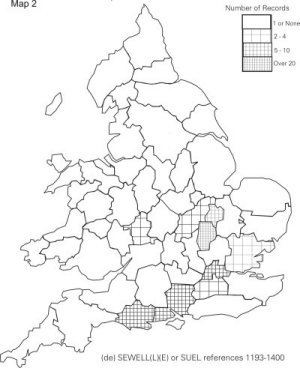 The personal name SEWALLUS (abbreviated to SEWAL) seems to have been transformed in East Anglia into the surname SEWAL or SEWALE.  There is even an example of the coupling of both personal name and surname, as in SEWAL SEWALL (Essex 1351).

Map 3 shows that the SEWAL(E)s  extended  outwards from East Anglia into neighbouring counties but not very much further. 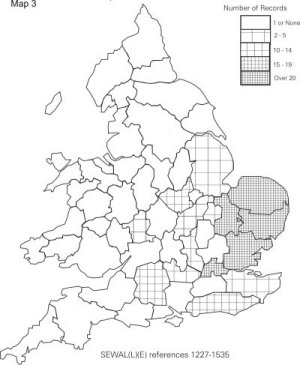 Earlier issues of Soul Search  (Don Steel in Vol 1, Nos 1, 9 &10) have shown that Kent and Sussex were SOLE or SOULE strongholds, and this is confirmed from the data I have collected, as illustrated by Map 4.  Initially the Kent and Sussex SOLEs employed the preposition de la or de, which was later replaced by atte.  In 1289, a Henry SOLE was mentioned at Nantwich, Cheshire and there were other isolated cases. 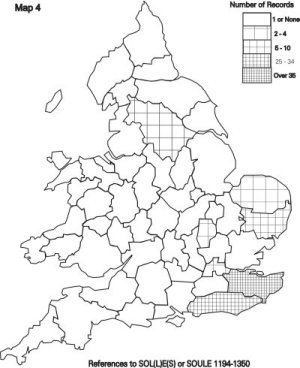 The few early records of the SAUL(E)s are displayed in Map 5 and are rather dispersed. 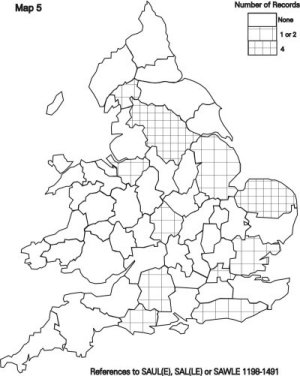 The first reference was in 1198 when the surname SAULE appeared to be linked with the place-name SALLE near Norwich (see Don Steel in Soul Search Vol 1, No 5).  SALLE, as a surname, occurs in Norwich in 1355 and in Essex, Sussex and Hants as late as 1381, but then seems to disappear.  A John de SAUL was an itinerant judge in Westmorland in 1227 and Adam SAUL acted as a juror in Wilts in 1257.  Roger le SAUL gave his pledge in 1260 at Nantwich and he may be related to the Henry SOLE mentioned above. The variant SAWLE appeared twice in Yorkshire and once in Sussex.

Map 6 attempts to show the main concentrations of surnames in the medieval period, the font size suggesting the number of records found.

Included are some smaller gatherings of other surnames that may or may not be of significance, such as SEWY, SWELLE, SALE, SWALE, SYLE and SULES.